L. Brown and Sons Printing, Inc., in Barre Vt. recently garnered five awards at the Print Industries of New England (PINE) Annual Awards of Excellence competition at the Boston Marriot in Newton Ma. Three of those products then went into national competition and won certificates of merit.

The PINE organization consists of approximately 350 printers in New England, and each year printers in the region submit samples of their work for judging. The judges, who have national stature and must have over 20 years of experience, look at all aspects of the printed products.

At the PINE meeting in April, L Brown and Sons won three “Pinnacle” (first place) awards: one for the Cas-Cad-Nac Farm Cookbook (the Cas-Cad-Nac Farm in Perkinsville Vermont raises alpacas for meat), one for the 2016 Vermont Life Weather calendar, and one for the 2016 Nordica ski equipment catalog for the North American market (Nordica ski equipment is based in Treviso, Italy). Second place “Awards of Excellence” went to the Adamant Co-op Cookbook and to Cerf+, personalized appeal mailing components.

"To win a first and second place in the same category... was just astounding."

According to Joel Higginbotham at L. Brown and Sons, there were at least 100 entries in both the cookbook and calendar categories. “To win one award in a category is a major accomplishment,” said Higginbotham, “but to win a first and second place in the same category, as we did with the Cas-Cad-Nac Farm Cookbook and the Adamant Co-op Cookbook, was just astounding. The judging is extremely stringent and takes into account the entire product, from the content, artwork, and photographs to paper choice and the tiniest details in printing and binding.” 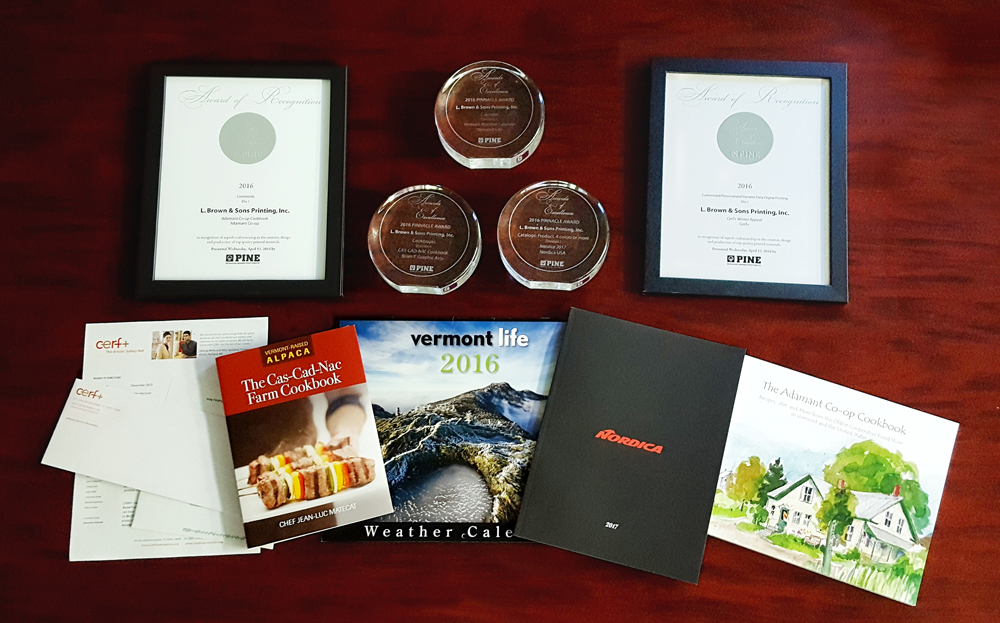 He went on to say that the three Pinnacle award winning products were then submitted at the national Printing Industries of America (PIA) competition and L. Brown and Sons won third-place certificates of merit in the three respective categories.

“We are delighted to win these awards, being by New England and national standards a relatively small printing company.” said Higginbotham. He also said that L. Brown and Sons is proud to be a Forest Stewardship Council (FSC) and Rainforest Alliance certified printer--totally green and chemistry free. And he added, “Before the month is out L. Brown and Sons will be the only printer in Vermont to be a G7 Gracol certified printer, which is the highest standard of color control in the world. We will be labeled masters of our craft.”

These awards are a testament to the team of employees and their many years of experience and knowledge and the leadership of Larry Brown and his willingness and foresight to supply his team with the best and latest in technology, equipment and materials.

Get started today by filling out our quote form or contacting one of our Customer Service Representatives directly.